Let’s face it: Moving and maintaining an antique Hammond will only become more difficult as time passes.
We have tons of respect for anyone who does, but to get all of the sound with none of the hassle, let’s learn
why the XK-5 has become the PRO’S CHOICE in the 21st Century.

HAMMOND-EXCLUSIVE PATENTED TECHNOLOGIES
Hybrid Multiple Key-Contact System: On classic Hammonds, pressing a key sequentially closes nine mechanical contacts: one for each drawbar. In normal play, your ears hear these multiple harmonics as one note. Depress a key slowly, however, and you hear the harmonics come in at slightly different times. The more drawbars pulled, the more “chewy” and soulful character is imparted to the sound. Some called it “bounce”, it was also indelicately referred to as “spit”. Many beloved Hammond keyboard “tricks” were born of this unintended imperfection.

These unique responses can’t be accomplished with MIDI single note-on keying, the system used in the majority of today’s keyboards. The XK-5 uses three mechanical contacts at different points in the keys’ travel. Each of these, in turn, triggers three virtual contacts, providing a discrete “note on” connection for every drawbar pitch in the same manner as the original nine-contact electro-mechanical Hammond organ. The result is a fingers-to-music connection perfectly duplicating the response of a Vintage “B” while saving on weight and cost. Plus, the time-spread between these “note-ons” is programmable, as is the order in which the harmonics speak, allowing for totally unique variations in touch and response. As all the contacts receive and transmit MIDI data, every nuance of your performance can be captured into a DAW.

Completely Redesigned Key-Bed: The XK-5’s keyboard action is built in-house, not sourced from a third-party
manufacturer. It was designed to duplicate the heft, bounce, and key dip of a “new old stock” and well-maintained B-3™: No springy synth keys allowed! Master Hammond players who tested early prototypes confirmed nothing comes closer to the feel and response they expect from a Vintage Hammond. Of course it has the “waterfall” key fronts critical to Hammond playing techniques such as palm slides and glissandos. Play the XK-5 alongside any other modern organ and we’re convinced you’ll find the difference stunning. Play the Xk-5 alongside a vintage Hammond and we’re convinced you’ll find the similarity stunning.

All-New Sound Engine: The XK-5 employs proprietary technology digitally recreating Hammond’s storied tone wheel generator with unprecedented accuracy and flexibility. Tone wheels were spinning discs on shafts, each with its own pickup pointing at the edge. The pattern of “teeth” cut into the edge of the wheel determined the pitch. In the XK-5, Physical Modeling and Sampling are combined in an exclusive process capturing the frequencies and properties of all 103 tone wheels found in the original organs, along with other important sonic details such as key click, Touch-Response Percussion™, vibrato-chorus, and more.

Tone wheel generators have become like rare violins or classic cars: Even though Hammond calibrated all instruments leaving the factory to sound identical, after decades of use, no two are exactly alike. To cover the extremes found in Classic Hammonds we’ve extended the range and programmability of both the overall generator characteristics (such as leakage and motor noise) and individual tone wheel behavior (such as the purity of the sine wave) to wide degrees. You are able to perfectly duplicate different conditions of Hammonds—from showroom-new to road-abused (if that’s what you’re going for) Presets capture the exact tonal qualities of famous artists’ instruments, from jazz great Dr. Lonnie Smith to Chuck Leavell (The Rolling Stones) to Gregg Rolie (Santana, Journey) and more. The sounds are not limited to just Hammond Drawbar tones. You may choose between the popular “Farf” and “Vx” transistor tones to transform the XK-5 (or A-3) into a swingin’ sixties combo organ. It doesn’t stop there. You can also choose a classical pipe organ division with 32 equivalent ranks of fine pipe organ voices.

Virtual Matching Transformer: In regards to the iconic Hammond sound, Tone-wheels and the Chorus-Vibrato scanner tell only a part of the tale. Our engineers’ research found all components in the signal chain play a vital role leading to the end product. The influence of the MATCHING TRANSFORMER provides a link to one of the Vintage Hammond’s most elusive qualities. All signals from the upper, lower, and pedal manuals passed through the matching transformer designed to “even things out” before the signal continued to the preamp. The transformer—a piece of iron with a coil wrapped around it—could “remember” some of its saturation based on how hard it had been working previously, thus affecting new notes played. Physicists call this hysteresis. Musically speaking, it affects how much “volume robbing” you hear and adds to what Hammond aficionados think of as the “breathing” quality of the organ. (The phenomenon is similar to why some recording engineers like transformer-equipped microphones and/or preamps for certain sounds.) In the XK-5, the matching transformer and its place in the signal chain is modeled precisely, and the saturation and hysteresis amounts are adjustable from barely-there to over-the-top. Like we said, we’re closing the final few millimeters of the realism gap.

MORE FEATURES
We didn’t stop there. Just a few of the XK-5’s more than 50 innovations and features include:
• Four full sets of Harmonic Drawbars plus pedal drawbars, just like on original Hammond console organs including
the B-3
• 12 additional virtual tone wheels are devoted to harmonically complex pedal tones (i.e. more than just 16&#39; and 8&#39;
sine waves), as found on Hammonds beginning in 1945.
• Custom tone wheel profiles available via download.
• Accurate Digital Leslie™. Anything else is just a “rotary simulator.”
• Continuously variable Digital Leslie™ speed if desired.
• Dedicated octave shift / transpose buttons.
• A true vacuum tube preamp placed in the signal chain exactly where it is in a vintage Hammond. Not meant for “rock and roll crunch” but to provide the “warmth” inherent in vintage Hammonds. Improved post DSP-based overdrive provides a full range of effect (in case you do want that “rock and roll crunch”.
• Improved vibrato-chorus.
• Dedicated on/off buttons and amount knobs for reverb, DSP overdrive, and assignable multi-FX.
• Lower B drawbars can alternately control 9 MIDI CC messages for external gear.
• Left and right outs can be used at the same time as Leslie output, for running the XK-5 through a physical Leslie
Cabinet in parallel to stationary speakers, a subwoofer, or house P.A.
• More key-triggering modes for pedal-to-lower coupler (Manual Bass function).
• Firmware updatable via USB flash drive or directly from computer.
• Crisp new OLED display is more readable under different lighting conditions.

We’ve retained the features that made working with the XK-3C and our compact Sk-series keyboards a joy. Hold any button and the first page of parameters most relevant to it comes up in the display—holding the Leslie speed button for Digital Leslie settings, for example. This saves you a ton of menu-diving when customizing your sounds. New patch-naming and copying features also make your housekeeping even easier. 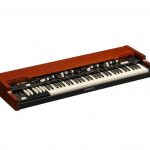 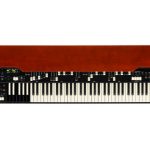 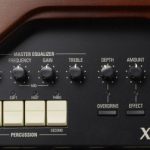 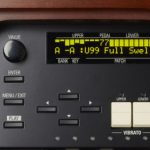 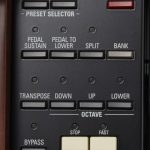