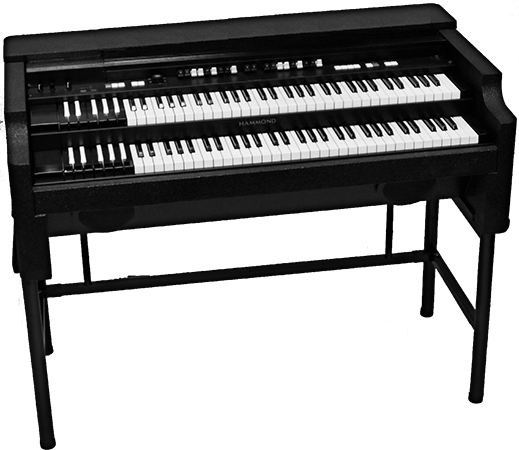 For years, Hammond has worked hard to make the vintage sound available in smaller, lightweight models, starting with the XB-2 back in the ‘90’s, through to the Sk-series, XK-1c, XK-5, and the new SkPRO. One can find these instruments onstage, in studios, and in homes everywhere in the world.

BUT…throughout the classic Rock and Roll era, even to the present, a B-3, C-3 or A-100 “chop” visually affirmed the soul or the intensity of the group of which it was a part.

Yes, for some, nothing says “Hammond” like a cut-down console, with a commanding stage presence and the accompanying size and bulk befitting the King Of Instruments. Many industrious musicians did the “surgery” themselves, rendering their full-sized consoles into something more manageable for the road, (and doing their roadies a BIG favor). Often times hand-painted black (with whatever paint was on-hand), with added handles on the sides and pieces of plumbing pipe for legs, the “beast” would look funky but majestic and sound with total majesty.

Now, Hammond revisits those vintage days with the new Limited-Edition “Porta-B.” It looks like power, sounds like power, and brings a vintage experience home for any musician lucky enough to stand (or sit) before it. It perfectly recalls the “chopped” Hammond we all remember.

Under the hood and beneath the twin-61 note square-front (“waterfall”) manuals, the VASE III engine is tried and true, with 3 sets of Drawbars (Upper/Lower/Pedal). Reverse- color Preset Keys, Vibrato/Chorus, and Touch-Response Percussion are just as you’ll find in a vintage Hammond. It whispers, it screams, and hits all points in-between, Just as a “real” Hammond should.

There’s more:
A hi-def onboard Digital Leslie provides the vital “other half” of the vintage tonality. For those who wish to use a Leslie Cabinet, the 11-pin hookup is “right there,” with a separate volume control within easy reach.

And perhaps the greatest surprise is the on-board full-range sound system allowing the Porta-B to speak on its own. Three 50- watt RMS amplifiers drive two 6” speakers and a 10’ woofer, making rehearsals and practicing easier. The volume of the onboard system can be easily controlled by a rotary knob – you can even turn it all the way off if you wish.

You won’t need any pieces of pipe, as the included metal stand puts the Porta-B at the same playing height as a B-3. Although the Porta-B has the prominent “heft” of vintage “chop jobs,” it’s still nowhere near the weight of the original. Your roadies shouldn’t complain – at least not as much.

In short, it’s a true Hammond with all the modern features in a vintage costume. You’ll also be amazed at the modest price for this collectible classic.

This “Porta-B” is a Limited Edition. Only a limited number will be made, and when those are gone, they’re gone.