The New Hammond Melodions feature a built-in microphone giving a powerful and accurate tone surpassing the use of an external mic. Just plug in to an amp, P.A., (or even a LESLIE™) using a normal ¼” cable and hit the stage! “Key noise” is minimized, and the use of equalizers and outboard effects becomes easy. Your sound will cut through, with clarity and high energy.

The Built-in Mic let you move freely onstage while playing your Hammond Melodion. Pop on a “wireless” unit to the 1/4″ jack and really take the stage! When you get to the Studio, the selection of standard and optional mouthpieces allow different configurations, including placement of your Melodion atop an Organ or Piano, playing it like a regular keyboard.

The PRO-44HPv2 is the “High- Power” Melodion also incorporating a built-in Dynamic Microphone. The 44HPv2 is a step beyond the 44H, featuring new reeds giving a brighter and louder tone. The perforated body allows the tone to “bloom”, making this model perfect for use in an electric band. The V2’s microphone has been upgrded from the previous version. The mid-high tonal range has been improved, resulting in a clearer, more natural sound when connected to an amplifier. 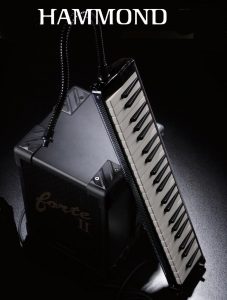