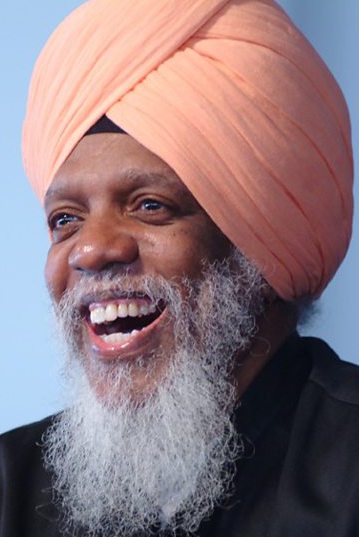 When one sees most photos of Dr. Lonnie Smith, the impression is one of mystery. The turban, the robes, the beads, the moustache/beard, and especially the eyes. In many of his shots, Doc looks like a Jedi master, a shaman, a guru; more like a spiritual figure than a jazz musician. In any case, he is impossible to ignore. Even if you were unfamiliar with his music, the intrigue in his countenance is compelling. Drawn to him, fascinated…What is this fellow about?
Then when you meet him, expecting lightning to be thrown from his fingers, and magical spells on his lips; the exact opposite proved to be true. A keen sense of humour and mischief, a beguiling smile, and from those eyes? Overwhelming good vibes.
Listen to his music, and a totally different aura comes into play. Depending on which moment has your attention, it could be jazz, it could be gospel, it could be progressive rock. In later days, it could be avant-garde classical. And without question, He could swing and bop with the best of them. All of these genres, sometimes in the same song…
Most unusual was Doc’s penchant to play extremely slow, and barely at a whisper. Now these two qualities are wonderful, never more so than in Doc’s ballad playing.
But sometimes when he and his guys were burning like a magnesium fire, ripping and riffing at preternatural tempos and at a powerful volume; Doc would lead the group down in volume, never stopping the juggernaut, quieter and quieter, with all the intensity intact, until the Guitar and Drums stopped playing altogether. Doc, on the other hand, would still be on it, playing silently-his face and body in the throes of musical ecstasy-and in a supernatural moment, his arms and hands would drift above the Hammond B-3’s keyboards-and you could see he was “playing” in perfect time. The audience would sit in perfect silence, and even though there was not a sound coming from the stage, you could “hear” the jam as clear as an unmuddied lake. Doc would linger like this briefly, then return to the keyboard, bringing the B-3’s sound back, and shortly the drums and guitar would rejoin-in perfect time. Then they crescendoed back to full power, leaving the audience in a state of shock and disbelief.
We at Hammond had the fine fortune to spend a lot of time with the great man. He taught us about life and music in ways formal education could only hope to equal. It is easy to believe Dr. Lonnie WAS, first and foremost a spiritual teacher, who shared his wisdom through music. Check out the other tributes that have been written in the past few weeks-there is as much about his presence, influence, inspiration and guidance as there is about his playing. And the crux of it all IS Doc’s playing-it is medicine, it is nourishment, it is fun, and it’s serious as well.
Don’t feel sad his body has gone to rest. A soul like his cannot be extinguished. His music lives on, and all the things Dr. Lonnie Smith was blessed with are there for you within the notes, within the sounds, within the grooves.  Godspeed, Good Doctor…and thank you.