Tony Thomas is a nationally known pianist/organist/keyboardist, currently based in Memphis.  He is a five-time winner of the Memphis Chapter of NARAS’ (the “Grammy People”) Premier Player Award for Keyboards and/or Piano, and he has recorded literally thousands of commercial music tracks. Tony has performed with Al Jarreau, David Sanborn, Thelma Houston, Marilyn McCoo/Billy Davis, The Temptations, Hank Crawford, Lenny White, Peter Erskine, and the late Richard “Groove” Holmes, among others.  Improvisation is his forte, although he holds a Bachelor Degree in Organ Performance from the University of Iowa, having trained there under the late Gerhard Krapf.  “When I was studying organ,” he says, “I bought my first Hammond, a model BC-V with a ‘Tall Boy’ Leslie.  I told Professor Krapf that I got it to practice more conveniently for my Senior Recital, but I really wanted it because I was convinced that this was the setup I had heard Milt Buckner use on his recordings for Capitol in the early to mid-Fifties.”  Tony has been hooked on swing ever since, at age 9, he had the rare opportunity to “sit-in” with Count Basie’s rhythm section during one of the band’s rehearsals, and later that same evening, to hear the band along with Joe Williams performing.  “That experience galvanized my respect for the groove in music, and I have to say that when I’m playing the Hammond, laying down a groove for soloing and accompanying is one of the great blessings in my life!”

Thomas has actually owned 4 different Hammond/Leslie setups, but today plays the SK2, mostly due to its obvious versatility and light weight, and the fact that its complete control of all the Hammond and Leslie parameters has allowed him to create, in his words, “my Dream Hammond!”

Thomas can improvise in nearly every sort of musical genre, from Jazz to Classical, Rock to R and B, even silent movies on church, concert, or theatre organs.  However, grooving in a trio or quartet setting with the Hammond SK2 is special because of the way the sound of the instrument is so perfect for blending into the collective energy, or creating its own. 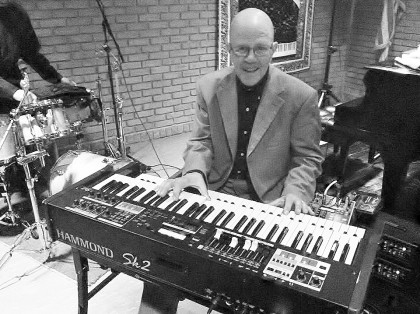