“My life has been filled with so many blessings, from performing on the Great Wall of China, recording in some of the most legendary recording studios, meeting and getting to play with so many amazing music legends, I have to pinch myself daily!”

Hailing from the South Bay of Los Angeles, Steve Aguilar (also referred to as SHAG) is a keyboardist, music producer, songwriter, music director, and tone aficionado.

At the age of 15 Steve began playing Hollywood clubs and quickly sharpened his stage skills. Within a few years he created an original music project called World Tribe with some high school friends, which fused reggae, funk, hip-hop, rock, and ska. After three albums and thirteen years of successful touring, Steve left the group to explore and enhance his musical vocabulary. International touring followed as a “hired gun” for a number of successful artists.

Steve has shared the stage as a keyboardist and in some cases music director for such artists like Alison Ray, Chris Pierce, John Mayer, Janes Addiction, Zoe Scott, Tomorrows Bad Seeds, Karl Denson, and Hoku. He has opened for the likes of BB King, Toots and the Maytals, and Colbie Caillat.

During his periods home from the road, Steve immerses himself in production and songwriting, having produced records for the likes of blues legend Arthur Adams, Rockstar INXS’s Brandon Calhoon, and many others. Steve is currently music directing and touring with Tomorrows Bad Seeds and has formed two new original projects getting ready to launch in 2018, Brightside and Tri-Phonic. Whether it’s performing, recording, producing, or music directing, Steve always brings positive energy and great passion to any musical situation. 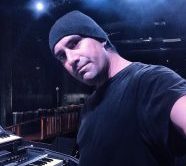