Rufus McGee Jr. son of Bishop & Lady Rufus and Linda McGee is Rochester’s best kept secret, however, now the secret is out! His parents began molding him at age 2 years old to become a musician.  Although he began as the church drummer at 6 years old, at 11, he progressed to becoming one of the most extraordinary organists/keyboardist that anyone has ever heard.  His ability is God-given, but can also be attributed to years of absorbing Gospel music passed down through the classic COGIC style of music, and the music of the church that he attended growing up in his hometown of Rochester, New York.  His drive and confidence developed from the challenge to rise above mediocrity.

It became evident very early that Rufus had a rare gift with a great demand on his life.  He began traveling and playing for Pastor Willie James Campbell – St. James COGIC, at a very early age.  The word was out across the country regarding Rufus’ talent.  The calls and demand for his accompaniment became extremely intense.  He later become connected with Bibleway Healing Assembly Church, where was appointed the Music Director and served there for 15 years.  Currently he serves as Minister of Music at Zion Dominion Global Ministries under the leadership of Pastor Roderick L. Hennings.

He is an exemplary musician, producer, and the founder of RMJ Productions.  In March 2013, Rufus McGee Jr. released his long awaited single “Draw Me Nearer”.  The single will mark the first release off of McGee’s forthcoming debut album set to release this year.

Rufus gives every ounce of his being to excelling and finishing well!  Rufus has a great passion and love for Gospel music and enjoys devoting his life to giving God his all. 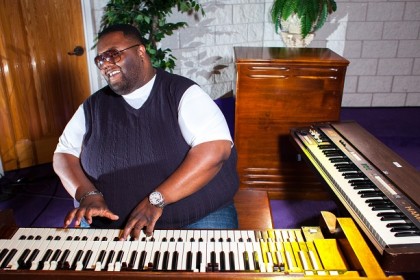