Raised in Nashville Tennessee, Rocky Searan has emerged as one of the region’s most sought after Keyboardists for both studio recording sessions and live Over the last 20 years Rocky has worked with several artists (Bluetree, Matt Maher, Signal Goodbye, Newsboys, Sonic Flood, Puff Daddy, Felix Da House Kat, Deadmau5, Hollywood Yates, David Ellis, Robert Payne, Riot For Romance, Michael McDonald) and shared the stage with top artists such as (Chris Tomlin, Wynonna Judd, Shinedown, Kirk Franklin, The Bacon Brothers, Mickie James, Mark Connors) Rocky’s strength as an improvisational player allows him to blend many different genres of music ,which has attracted several bands and artists to work with him in a live and studio atmosphere.

Being a versatile keyboardist and Producer, his creativity in programming loops and track production ranges from wide range of complex Glitchy Electro Dance to Ambient Industrial Orchestration. In addition Rocky allows artists to be able to execute production tracks and loops in a live atmosphere. This gives artists and bands the ability to create a sound as close to their record as possible or give them an outlet to be able to transition and experiment with their music to create a live show that’s captivating for the audiences.

Overall, Rocky provides artists and producers with an outlet to think outside the typical box of creativity and explore options to bring a new level of energy to the stage, ultimately capturing that “perfect sound”. With a developed sense of rhythm, theory, improvisation and the ability to play in almost any style. In 2007 Openlabs out of Austin Texas reached out to Rocky for creative input on the design, sound development and R&D on the Gen 5 and Gen 6 Neko, Miko and Sound Slate Model. Rocky was able to build an extensive clientele of students over the years. Students of all levels will benefit from Rocky’s life long experience on both the stage and in the studio combined with his extensive knowledge of theory. 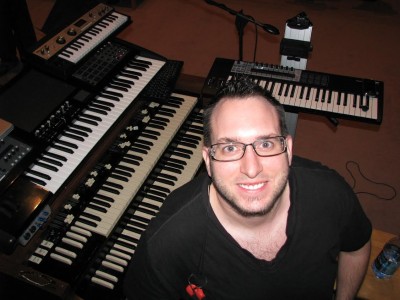