Rob plays the B-3

New York native, Rob Burger, has developed his talents as an arranger, composer, and multi-instrumentalist from over two decades of acclaimed collaborations. These include a diverse roster comprising of John Zorn, Laurie Anderson, Marianne Faithfull, Calexico and Iron & Wine.
A lifelong musician, Rob began his musical journey at the piano, starting to learn at the age of four. He would go on to study under jazz luminaries Max Roach, Archie Shepp, and Yusef Lateef at the University of Massachusetts. Alongside an impressive formal education, Rob’s informal education consisted of frequent visits to New York City’s creative hubs, The Knitting Factory and The Kitchen in the 80s and early 90s. It was in these cultural establishments that Rob became acquainted with the likes of Arthur Russell, David Byrne, and Laurie Anderson.
With the avant-garde door having long been kicked open, Burger relocated to San Francisco, and made a lasting impression upon the area’s music scene with his chamber-music collective, Tin Hat Trio. It was during this time, that Rob furthered both his session collaborations and film-score work. When the Tin Hat Trio disbanded in the early ‘00s, Burger found himself back in NYC, working closely with the composer John Zorn, contributing to many of his recordings.
Rob has composed and contributed to numerous films including Ocean’s 8, Nebraska, Trouble, Everything Is Illumuninated, Bully, and has scored for clients such as Apple, BritBox, The Guggenheim, Wall Street Journal, PBS, Toyota, and Mercedes-Benz. Rob’s work is permanently featured at the Museum of the City of New York
Rob released his first two solo albums Lost Photograph and City Of Strangers on the label Tzadik during his time in New York. In 2011, a move to Portland, Oregon, inspired a new studio set-up with an enviable collection of vintage keyboards, and a new album project, The Grid.
The Grid “recombines neo-classical soundscapes, 70’s kosmische, and jaunts of 20th century exotica into a completely unique genre-quilt that synopsizes his long musical trek through multiple cities, scenes and sounds.” The album, featuring Laurie Anderson, was released in 2019 by the label Western Vinyl.
Rob’s newest solo venture, Marching with Feathers, departs from the controlled exotica and kosmiche of 2019’s The Grid towards a genreless seesaw of electrified apprehension and capacious piano rumination. The album was released in early 2022.
Rob now lives and works from his studio in Nashville, Tennessee. 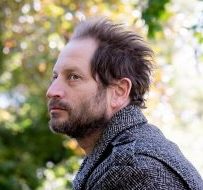