Peter was born in 1965, and began playing  piano at the age of 4. His first performance was one year later at The Neighborhood School of Music, in New Haven Ct.,Where he was classically trained. In 1976, He moved to northern California and started his first band, Smeagol. It was a mix of punk-funk and soul, way ahead of it’s time. Peter studied music through 1985, ending up at Berklee College of Music in Boston, Mass., where he majored in composition and performance. Moving  back to the San Francisco bay area, he began his long journey as a working musician,  playing and recording with just about everybody on the scene.

After starting numerous original bands, playing countless local gigs on the west coast, and endless sessions, Peter headed east in 1996 to Atlanta Ga. Where he joined the legendary Original P-Funk line up, taking over for Bernie Worrell , a huge influence in his playing, filling the shoes of a genius and legendary performer.

With several years of touring in P-Funk under his belt, and  having shared the stage with everyone from Bootsy Collins and Snoop Dogg, to Chaka Kahn and Issac Hayes, In 2000, Peter moved to Detroit Mi. where he started Shock Logic Productions, a recording and video company in an old church which he converted into a studio. He spent the next few years honing his production chops on countless independent recordings and music videos.

In 2006, Peter was asked to be musical director for “The Truth”, backing band for Top Dog recording Artist Ty Stone. They did a national tour opening up for Kid Rock, and then he hit the road again with the Asheville South Carolina band “Seepeoples”. He could also be found working with the Nashville
organization,The Muzik Mafia (Big N Rich)

In 2008 Peter decided to move to Nashville to be closer to the recording and touring industries. In 2009, following the death of Billy Powell, Peter was asked to audition for Lynyrd Skynyrd, and jumped at the opportunity to fill another one of his all time heroes’ shoes. He got the gig, and continues to tour and record with the legendary southern rock band.

Peter still plays various dates with the 420 Funk Mob, featuring George Clinton and members of the P-Funk Allstars, as well as playing with Kid Rock’s ex-guitarist and Grammy winner Kenny Olson, in their band “The All Time Low Stars”. When not on the road, he can be found in the studio producing and recording with a wide variety of artists, in many musical styles. Peter just released his debut solo project “Autopsy-Turvy”, which is now available at www.peterkeys.com 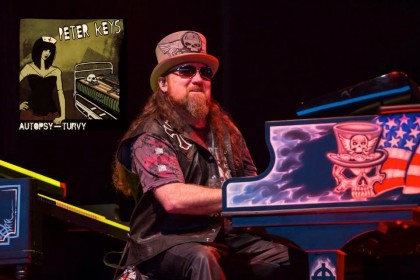