Currently based in Chicago, Nick Psyhogios has been performing as Chicago’s Own Piano Man with a large repertoire of music ranging from Billy Joel, Stevie Wonder, Elton John, Otis Redding, Jerry Lee Lewis and more.

Nick is a lifelong musician, songwriter, & producer; self-taught on several instruments including piano and guitar. In the late 1970’s and 1980’s Nick was in a band called “Stagger” which evolved into “Ruffian”. Ruffian performed at several Chicagofests and traveled the country. Ruffian also opened for a diverse group of acts including The Ramones, Brian Adams, Greg Kihn, Tower of Power, Dion and Survivor. The band attracted the attention of Paul Anka, who signed them in 1984. They recorded an album in LA where Nick worked side-by-side with David Foster, Paul Anka, and Patrick Simmons of the Doobie Brothers.

Through the 1990’s Nick arranged and performed with “The Rockets”; an a cappella ensemble sponsored by Anheuser-Busch. They performed at numerous conventions such as the National Restaurant Association, Food Market Institute, and other venues representing Anheuser-Busch for over six years. Nick coordinated the entire production for that group, and wrote parodies, performing across the country. Nick also wrote & produced jingles for local radio sports shows and other clients, most notably for a software product entitled “The Study Game” by Lessonware.

Nick also plays with his own bands “The Chicago Hitmen” and “The 52nd Street Band”. He and wife Phyllis produce concerts each year to benefit St. Jude Children’s Research Hospital and Chicago’s Lurie Children’s Hospital, raising over $37,000 for these charities.

Nick is working on a solo CD to be released in the fall of 2019, which will feature his fine original songs in a variety of styles. 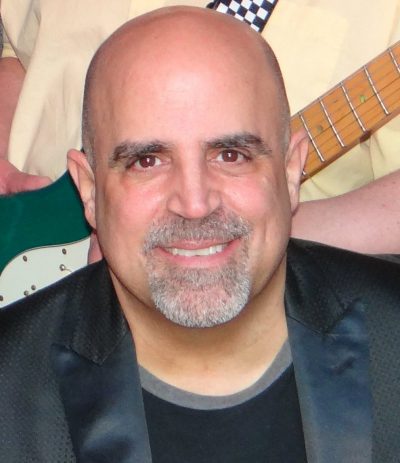