Michaela Thomas is a multi-instrumentalist singer-songwriter based out of Nashville, TN. In addition to playing finger-style acoustic guitar on her solo project, she also plays organ and sings harmonies in the folk rock band Daniel and the Lion. Michaela joined the band when its original members, Jimmie Linville and Daniel Pingrey, relocated from Wisconsin to her home city of Nashville. As a member of Daniel and the Lion, Michaela went on a full U.S. tour during the summer of 2014 opening for legendary rock band Counting Crows. She played the Hammond SK1 on some of the nation’s best stages, including the Greek Theater in Berkeley, CA and the Ryman Auditorium in Nashville, TN. Playing the Ryman was a dream come true for Michaela, as she has known of the legendary venue since her mother moved the family down to Nashville when Michaela was still in elementary school in order to pursue her musical aspirations as a bluegrass singer. Growing up around gifted musicians and seeing her mom on stage performing greatly encouraged Michaela to begin learning multiple instruments and trying her hand at writing songs. She learned guitar, piano, and flute during her formative years, and is now incorporating all three elements into her songwriting and performance. Michaela released her first solo record, Scandinavia, while on tour with the Crows. Daniel and the Lion recently changed their name to Canyon Spells, and are currently working their third full length record to be released on Megaforce/Transdreamer Records. The Hammond SK1 is Michaela’s newest instrument, and she is greatly enjoying exploring it’s unique capabilities and distinct sound. 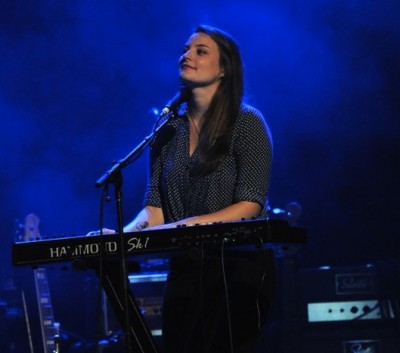