Born September 2, 1946, Chicago, Illinois, USA. Born into a musical family, in which were several professional musicians, Grebb learned to play keyboards, guitar and saxophones. He became a session musician and in the 60s and 70s played with various groups, including the Buckinghams and the Fabulous Rhinestones, and he also backed Paul Butterfield and Mike Bloomfield. He continued his session work through succeeding decades, working with artists such as Rosanne Cash, Rick Danko, Levon Helm, Willie Nelson, Stevie Nicks, Otis Rush and Leon Russell. In particular, he attracted attention for his contributions to records by Bonnie Raitt and Maria Muldaur. Raitt appeared as a guest on Grebb’s 1999 debut Smooth Sailin’, as did Taj Mahal and Steve Cropper. Grebb also appeared on Telarc compilation albums such as Blues For A Rotten Afternoon, Meet Me Where They Play The Blues and Telarc’s Got The Blues. 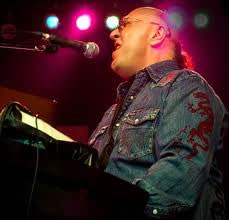