Theatre Organ Phenom Mark Herman began studying the piano at seven and began classical organ lessons at the age of 12.  His first introduction to the theatre organ was in fourth grade at the Embassy Theatre in downtown Fort Wayne. Mark began theatre organ studies with John Ferguson of Indianapolis, who is also recognized as a consummate Hammond Organist. In the period since, Mark’s star has been on the rise as a much-in-demand Theatre Organ Concert artist. In 2004 he won the ATOS Young Theatre Organist Competition in Milwaukee at the Riverside Theatre, which enabled him to perform a successful concert for the ATOS 50th Anniversary Convention in Pasadena. His tours of Australia and New Zealand set records in CD sales at many of the venues in which he appeared. Mark is also an accomplished Hammond Organist. 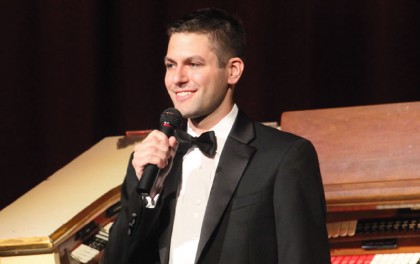