the hammond sk1 will make you happy.

Is the sound people use to get closer to god.

ideal for your home, your church , your soul.

Leonardo Genovese was born in Venado Tuerto, Argentina in 1979. After some years of studying classical piano at the National University of Rosario as well as private lessons in contemporary music, he moved to Boston in 2001. He started his career at Berklee College of Music where he studied with Danilo Perez, Joanne Brackeen and Frank Carlberg, among others. Leo graduated as a Professional Music Major in 2003 and has been constantly performing and recording with talented musicians such us Hal Crook, Darren Barrett, George Garzone, Francisco Mela, Joe Lovano, Bob Gulloti, Phil Grenadier, Dave Santoro, Chris Cheek and Ben Monder. In 2004, he released his first solo album entitled Haikus II signed by Spanish label Fresh Sound Records. Leo has his own project “leo genovese and the chromatic gauchos” which will be recording a new album in earlier 2007. He also performs regularly with the Esperanza Spalding Group, the Mike tucker Quartet, Planet Safety (w/Bob Gullotti and Dave Zinno) and Hal Crook every tuesday at AS220 in Providence. 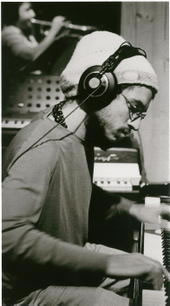