“Just call me a ‘sponge,’ I’m trying to collect as many musical and artistic experiences and expressions as I can.” was Kayleigh Goldsworthy’s response when asked about her current path within music. Originally from upstate NY, finding her start in Syracuse NY’s indie rock band The Scarlet Ending, Kayleigh commenced that expression by being a multi-instrumentalist within the band during their near decade of activity. Bringing experience with guitar, ukulele, mandolin, and occasional keys with being a classically trained violinist, not to mention lending lead vocals to the act, The Scarlet Ending released multiple albums that all included Kayleigh’s involvement, and did both national, international, and USO touring with the band before their dissolution in 2012.
Kayleigh relocated from upstate NY to Brooklyn in 2011 to broaden her footprint within the industry, working on and releasing her debut self-released solo album Burrower in 2013, which branched her experience into more of an indie-folk direction. That sound and style earned her opportunities to perform on the Chuck Ragan curated “Revival Tour” both in 2012 and 2013. Additionally, in increasing the size of her network within the industry, she spent time as a touring member of Harvest Records/Capitol Records act Young & Sick in 2014 and 2015 playing keys, violin, and backing vocals, doing both domestic and international touring. More recently, Kayleigh can be found as a touring member of Dave Hause and The Mermaid, who are currently signed to Rise Records and promoting their most recent album Bury Me In Phily with domestic and international support dates as well as headline touring. Regardless of her former and current touring commitments, Kayleigh continues to write material for her follow up LP, to be released at a still to be determined time.
Kayleigh Goldsworthy is proud to be a Hammond Artist. 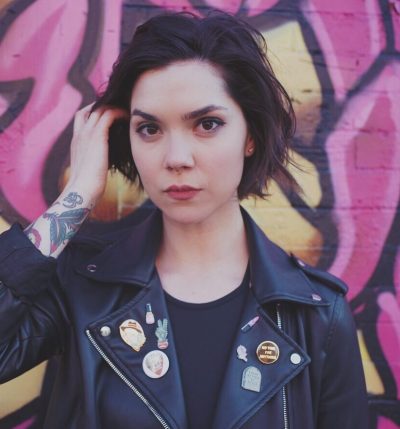