International touring and recording artist, Josh Hoyer, has been performing since 1982. Music has always been his haven from a crazy world; a place of freedom and pure expression.
A Lincoln, Nebraska native, Hoyer took every music class he was able to in public school, also singing in church choirs during his childhood. Hoyer also received great tutelage at the World Famous Zoo Bar from touring Blues artists and Blues Legend and Lincoln resident, Magic Slim. Hoyer played in the Eugene, Oregon Blues and Jam Band scenes and the New Orleans music scene in extended stays as he bounced around the country in his early 20s. Once arriving back in his hometown in 2002, he briefly toured with Bay Area Blues Singer, EC Scott. First starting on saxophone, he eventually became a self-taught keyboardist in his late-20s, inspired to write music and lead bands of his own.
Since 2003, Hoyer has written ten studio albums to local, national and eventually, international acclaim. Versatility as a writer is one of his strong suits, blending all the styles in his deep catalog of influences. From Soul to Country, Funk to Doo-Wop, Rock to Pop, the one thing that holds it all together is the strong songwriting and undeniably Soulful voice.
Forming his current band, Josh Hoyer & Soul Colossal, in 2013, Hoyer’s writing focused in on his love of Soul, Funky Blues and Classic R&B. Incorporating Hammond Organs into his instrumentation was essential in creating a Colossally Soulful sound that harkens back to the finest Gospel influenced Soul and R&B. Since 2013, Hoyer, his Hammond and top notch band have played over 125 shows a year in 38 states in the U.S. and 9 countries overseas.
If you can sum up his music and performance in a word: genuine.
That is why Hoyer is most aptly referred to as a Soul artist. He is real. The music is real. Not flashy, not fluffy, not fabricated. Honest and real.
Josh Hoyer is honored to be a part of the Hammond Family or Artists and is humbled to continue the long-standing tradition of using the Hammond Sound to lift people up through the power of music.
“If James Brown and Otis Redding had a love child, it would be Josh Hoyer.”- NO DEPRESSION
“Josh Hoyer & Soul Colossal still prove to be at the top of the contemporary soul movement.” -BLUES MAGAZINE
“Their concerts are an explosion of emotions…” – LA VOZ DE GALICIA
“If you enjoy artists like Curtis Salgado or Nathaniel Rateliff & The Night Sweats, you owe it to yourself to check out the serious talent, wisdom and joy that Hoyer puts down.” – THE READER
“At its core, soul music that is actually good is music that dwells on heartbreak and pain yet translates to a sense of pleasure and redemption for the audience. This is something that is often lost in the “modern” soul music that infatuates so many hipsters today when they fall in love with bands who seemingly preach soulful songs but fail to deliver the emotional goods. For Nebraska band Josh Hoyer & Soul Colossal, the heartbreak and pain is a driving force that comes natural, and when it comes to real soul music, they absolutely deliver.” – GLIDE MAGAZINE 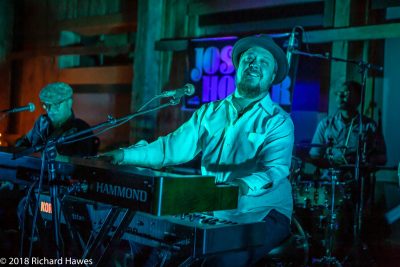