Jon plays the SkPRO and Sk1

Jon began his musical career at age 12 in the San Francisco Bay Area playing organ and accordion in bands and solo engagements, first recording studio dates 1968 when he met Robert Moog who personally delivered the Moog III to San Francisco Radical Laboratories where Jon was working at the time and jamming daily with members of Quicksilver Messenger Service, he next joined original rock band Hades with which he played until moving East to attend Berklee.

Playing 7 nights a week in Boston’s notorious Combat Zone next lead to touring with successful show band Easy Living and then became house organist at the exclusive Wychmere Harbor Club Cape Cod MA where he played private parties for Tip O’Neill Speaker of The House. Returning to SF for a reunion concert in 1980 with Eddie Money and members of Tower of Power, next Jon moved to Europe where he lived and played for a number of years, still playing annually where he has an enthusiastic following. Jon began hosting his own TV show “The Jon Hammond Show” in 1984 and is now in 27th year on cable TV in Manhattan and heard daily on KYOU Radio HammondCast Show with regular appearances at international trade shows. 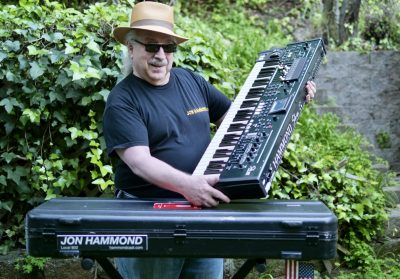