Band/Affiliation:Louis Prima and the Witnesses / The Jenny Jarnagin Band

What does Sayre, Oklahoma, Fort St. John, British Columbia, and St. Petersburg, Russia, have in common? These are three cities that shaped Jenny Jarnagin’s musical gifts. Her distinctive sound comes from her small town roots mixed with her extensive classical training. With her unique ability to blend classical, jazz and pop, Jarnagin is a singer/songwriter with an eclectic voice accompanied by her extraordinary piano skills.

Grammy award winning producer, Bubba Smith, agrees, “Jenny’s musical intuition is spot-on. Her combination of haunting melodies and lyrics captivated me at first listen.” Grammy award winning arranger, Bob Freedman, says, “Jenny’s songs have a marvelously unique and intriguing quality which manifests itself on a number of levels.” Paul McCartney’s sister, Ruth McCartney, of McCartney Multimedia, describes Jenny as, “that rare jewel in a sea of musical mayhem. She has a real quirky content slant that is refreshing and gives a different view to the mundane world which creeps up on us all.”

Jarnagin describes her musical style as, “earthy, sophisticated and very original.” She also believes it to be “musically nutritious because it is rich in substance and meaning.” When asked to illustrate her personal style, Jarnagin says she is, “true to life, down to earth, and above all, original by nature.” A single mother of two children, Jarnagin states, “I’ve also had the privilege of experiencing deep emotional opposites like desperation and empowerment, heartache and joy, failure and triumph, and frustration and clarity.” A song that stands out to her off of her most recent album, Bullseye, is “Dealing with the Devil.” She says, “it represents keeping faith through times of desperation, holding on when facing a force that is brutality destructive. This song represents a personal season of change in my own life, a season that could have ended in despair, but instead ended in victory.”

Jarnagin made it clear at a very early age that she was headed for a career in music. At the tender age of three, she walked up to her family piano and began playing by ear, mimicking lullabies that her mother sang to her. Jarnagin, the youngest of four children, was born an “Okie” in Sayre, Oklahoma, but was raised Canadian after her family immigrated to Salmon Arm, British Columbia. Besides playing piano during her childhood, she enjoyed picking wildflowers, riding horses and playing with her pet chicken, Jenny. She also could be found ocean fishing with her father or doing ranch work such as welding, building fences and driving tractors. As she grew up, Jarnagin performed regularly at rest homes, local churches and other town events. After formal lessons beginning at age five, she then became the church pianist at the young age of seven. She was constantly surrounded by music through choir, jazz band, brass orchestra, piano recitals, piano accompaniment for plays, school productions, concert band and the list goes on. Jarnagin spent her summers studying and performing at The Conservatory of Music in Victoria, British Columbia.

During her college years, Jarnagin auditioned for an opportunity to study abroad over the summer semester at The Conservatory of Music in St. Petersburg, Russia. She recalls this as a pivotal moment in her life, “Going to Russia changed my outlook on life. My time there greatly strengthened my appreciation of musicianship as well as my technical proficiency as a pianist.” Jarnagin graduated from Texas A&M University – Commerce with a Bachelors Degree in Piano Performance. Shortly thereafter, she pursued a Master’s Degree in Music Education at Northern Arizona University while teaching in the music department at Xavier College Prepatory in Phoenix, Arizona.

Jarnagin’s musical journey took a turn four years ago. The death of her grandfather prompted her to return to her roots in Oklahoma. As she was going through an old chest filled with family heirlooms, she remembers, “At that moment I asked myself what I would leave behind as my legacy. I knew the answer was music.” Since then, she has been extremely passionate about her music and written nearly two hundred songs. Currently, Jarnagin is continuing to write and has expanded her horizons further with upcoming Canadian tours as well as shows in the US. She recently released her 10th album, Bullseye, in 2014, which was produced by Grammy Award winner, Bubba Smith, and recorded at Ben Folds (RCA) studio in Nashville, TN. 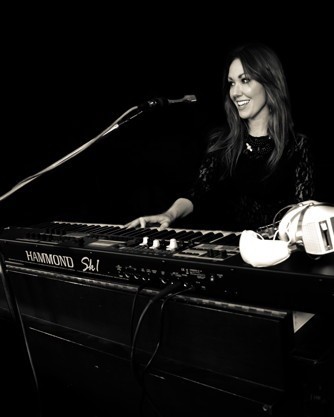