Born in Stockport, England, Geoff received his passion for music through a family connection; his father had been organist and choirmaster at a church in Stockport. Even before heading off to Leeds School of Music in 1971, it was obvious to family and friends that he had the making of a future star. His older brother Gordon was in awe of the young man’s talent and drive. “From the early days he always showed the potential of a showman, like the time at 13 he sprayed his brand new school shoes silver. I also remember in ’67 making him a huge cabinet for his bass speaker in the basement of our big old house. He thought it was magnificent! I wish now, though, I’d had a tape running the time he played an extemporization on Whiter Shade Of Pale and Nights In White Satin at my brother Andy’s engagement party back in October ’69. It was simply spellbinding. I just knew then he had that amazing mystery for creating music.”
Geoff’s exposure to other musicians at college in Leeds led him in 1974 to She’s French, his first real band. “We started off (under the name) Nathaniel Mouse. Melody Maker used to run band contests, and we got to the Northern finals. We used to play at a lot of clubs in the north of England. We were playing very experimental stuff, jazz-fusion mixed with Yes and classical stuff – a real mish-mash of styles.”  Geoff cemented a friendship with Steve Howe that would manifest itself several times over the next 25 years. ASIA grew out of the ashes of YES, as Downes & Howe joined together with Carl Palmer and John Wetton. “The success with ASIA came very quickly. It was if I had stepped off one bus and another came along right away.”
http://geoffdownes.com/ 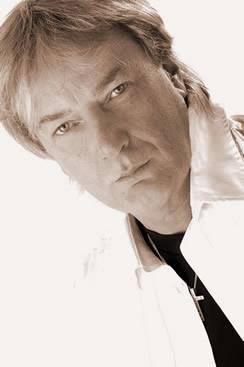