With the passing of legends like Jimmy Smith and Jack McDuff, Eric Scortia is one of a small handful of heirs to the rich legacy of the Hammond B3 organ – the source of a shimmering and hypnotic sound that has permeated R&B, jazz, blues, soul, gospel, funk, pop, rock and country music for more than a half-century. While some artists specialize in one or two of these varied styles, Scortia has firmly positioned himself as not only a master of them all, but an innovator who borrows from each and creates mesmerizing hybrids that defy any quick and easy categories.

This combination of versatility and ingenuity is the driving force behind The Tone Generator, Scortia’s latest album released on his own Organ-Ized Records. Aided by a three-man crew whose individual credentials span several decades and a host of prominent affiliations, Scortia reinterprets a variety of jazz and pop standards – along with a few lesser-known nuggets – and filters them all through his infectious groove-oriented perspective. While the list of songwriters featured within the album’s eleven tracks ranges from Chester Thompson to Aretha Franklin to Bobbie Gentry to Oscar Hammerstein, Scortia lives up to his nickname of “The Scorch” by turning up the heat on his Hammond B3, leaving an unmistakable mark, and making every piece of music he touches his own.

“This record is a snapshot of some great material written by other songwriters,” says Scorch. “Some of the songs are well known and others are a little off the beaten path, but all of it is infused with the classic B3 sound. These songs have become a very important – and very popular – part of our live set over the past few years.”

The Tone Generator is one of the latest chapters in a multi-faceted career that has cemented Scorch’s reputation as an A-list songwriter, performer, solo artist and session player – not just in and around the Texas music circuit that has been his base of operations and his home for most of his life, but on the national and international scene as well. After years of playing the Hammond B3 with the best, he has himself come to be regarded as one of the best.

The grandson of Romanian immigrants – arrivals from a culture long known for its exotic and diverse gypsy music – Scorch was born and raised in Massillon, Ohio, a tough, working-class town located about sixty miles south of Cleveland, the Midwestern “heart of rock and roll.” Unlike most keyboard students who study piano first and then switch to organ, he gravitated immediately to the Hammond B3 from the age of five. At ten, he witnessed the visceral energy of gospel and country music when he saw Johnny and June Carter Cash perform at a Pentecostal church in a nearby town – an experience he marvels at to this day. Shortly after, he saw the Jackson Five and a few years later the VSOP Quintet featuring Freddie Hubbard, Herbie Hancock, Ron Carter, Wayne Shorter, and Tony Williams. His other early influences were numerous and diverse – from jazz and R&B greats like the aforementioned Smith and McDuff to keyboardists like Larry Young, Brian Auger, Billy Preston, Jan Hammer and Deep Purple’s Jon Lord.

Shortly after high school, Scorch moved with his family to the Lone Star State, which has been his home ever since. He enrolled at the University of North Texas and studied music for a few years but didn’t finish right away, opting instead to take a position as a keyboard clinician for a musical instrument manufacturer – a lucrative gig that had him performing at trade shows all over the country, and clinics at schools and universities.

He toured briefly with Delbert McClinton in the mid-1980s, until Texas blues guitarist Omar Dykes – frontman for Omar and the Howlers, newly signed to Columbia at the time – invited him to join the band on their Hard Times in the Land of Plenty and The Wall of Pride tours, based on a recommendation by friend and colleague Stevie Ray Vaughan. He logged in at least 200 dates per year with Omar and the Howlers, playing the Hammond B3 and piano, recording albums with Omar and the Howlers, and opening for Stevie Ray Vaughan, The Fabulous Thunderbirds and other powerhouse blues-rock bands of the day. All the while, he managed to hold together his own band, playing gigs as a frontman and continued developing his own material.

By the end of the ‘90s, Scorch had finished with Omar and the Howlers and landed a gig with Fort Worth-based tenor saxophonist Johnny Reno, who’d already established himself as the frontman for the Sax Maniacs, mainstays of the Texas roadhouse rock and blues circuit. Scorch and Reno assembled a band called The Lounge Kings, a neo-swing combo that toured extensively and electrified U.S. and European audiences with a spectacular live show.

In the midst of these various affiliations – and the relentless gigging and touring that came with them – Scorch established a solo recording career on the Heads Up label with the 1993 release of A Night on the Town, followed by Vital Organ in 1996. He parted with Heads Up a few years later and launched his own label, Organ-Ized Records, where he released Singled Out in 2004 – an album that featured the lineup of guitarist Henry Johnson, drummer Greg Rockingham and saxophonist Marchel Ivery.

By the early years of the new decade, Scorch had established himself as a vibrant and diverse stage performer, a prolific songwriter, a highly skilled studio artist, a savvy business owner, educator and a voting member of the National Academy of Arts and Sciences (home of the Grammys). Along the way, he has remained open to the influences of Hammond B3 virtuosos of previous generations by spending time at the keyboard bench alongside masters like Jimmy Smith, Lonny Smith, Jack McDuff, Jimmy McGriff, Joey DeFrancesco, Billy Preston, Steve Winwood, Chuck Leavell, Brian Auger and Reese Wynans.

He has built a state-of-the-art recording studio in his Dallas home, where he does session work for his and other artists’ projects. He is featured in Mark Koster’s Texas Music (2000) and both editions of Mark Vail’s The Hammond Organ: The Beauty in the B3 (1997 and 2002), and has worked on film and TV projects with Robert Rodriguez, Robert Altman, Bob Giraldi, and other high-profile directors.

Despite these and other accomplishments, a bit of unfinished business continued to bother him. “A few years ago, I was sitting in my house, which is pretty close to the University of North Texas,” he recalls, “and I was thinking that the campus was only a stone’s throw away. I decided it was time to go back and finish my degree. At that point, it was personal. I used to say that if I didn’t go back and get that degree, it would bother me all the way to the grave. I finally just decided to go and get it done.”

He did so in 2007, but the academic milestone was not a finish line by any means. As far as Scorch is concerned, there’s always more ground to cover and more artistic territory to be explored. He’s already written and recorded songs for all-original rock- and jazz-oriented albums to be released over the next few years. Several of the many projects that Scortia has participated in recently include working with producers in Nashville (Bradley Prakope) and Memphis, Tennessee (Terry Manning and Jim Gaines) and playing on albums by Lance Lopez, Chris Watson, Wes Jeans, Cortney Now, Clay Shelburn, Eddie Kirkland, Charles Collins, and Katie Carroll, to name a few. Scortia is currently working on a new project with Gregg A. Smith and the Blues Review Band, with whom he performs regularly. He recently traveled to Switzerland and played at the prestigious Lucerne Blues Festival. He also had the recent privilege of playing on the main stage in Grant Park at the Chicago Blues Festival, the Lafayette Square Crescent City Blues and BBQ Festival in New Orleans, the Blues in the Natural State Festival in Fayetteville, as well as the Ft. Worth Blues and Soul Festival, to name several. He also regularly plays the Denton, TX Arts and Jazz Festival. It’s part of his ongoing ambition to embrace and master as wide a segment of the musical experience as possible. Musicians who are looking for a high caliber touring keyboard player such as Scorch should know that he can be contacted via his website www.ericscortia.com.

“I never wanted to be pigeonholed,” he says. “Music is like the wind, almost like a spiritual thing. You can’t just grab a hold of it. You can write notes on paper, you can record a CD, but the music itself is all around us all the time. So if that’s the case, why limit yourself by saying that you’re just a jazz musician or just a blues-rock musician or whatever? If I can cover a lot of different genres, and do it all with my own sound – to the point where someone can listen to it and say, ‘Yeah, that sounds like Scorch’ – then that’s just the way I would prefer it.” 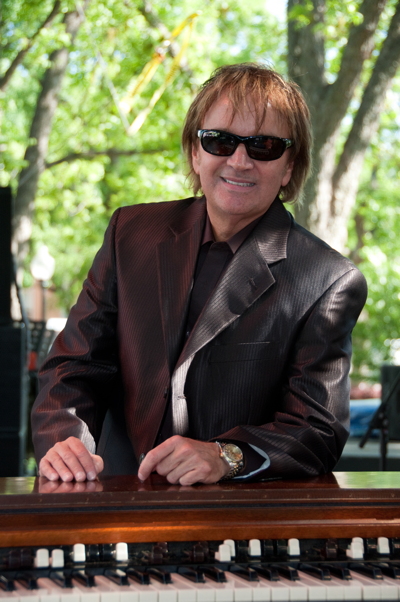