“There’s something so incredibly inspiring about my SK-1. I feel like it’s a happy organ and it’s a really invigorating feeling to play and write on it. I feel different, like my new rig has awakened a new part of me as an artist. It’s very exciting!

Before the Hammond Organ, the Keytar, the micro controllers, the mic, the flashing lights, there were always the songs Emiko wrote. Written under the dining room table when she was six, then moving to various studios around the US, Japan and Europe, and finally settling in L.A., Emiko has what can only be called a “whoppingly paramount” catalogue of over 3,000 songs including #1 pop songs, R&B/soul songs, full theater and film scores, J-pop, and so much more.

Deeply rooted in classical music, Emiko began her career at the tender age of just two and a half, retiring as a concert pianist by age 12.

This impressive catalogue of 3,000 songs has been put to good use; recognized by the Songwriters Hall of Fame in her early 20’s, it was clear Emiko would make her mark as a songwriter and performer. She’s graced the pages of Billboard, Music Connection, FM Sound, Keyboard Magazine, and countless other publications as an award winning songwriter for SONY/ATV, Universal Music Group, InGrooves, Fontana, and now 37 Records/McJames Music Publishing. Her music can be heard worldwide on TV shows, in films, and even on the theater stage.

Emiko’s songs have hit #1 spots on radio charts and fan charts across the world and her concerts have had celebrity and foreign dignitaries in attendance. Most recently, Emiko’s music videos have caught on like wildfire through Viacom network platforms (MTV, VH1, FUSE, etc) and Emiko signed on for her first TV hosting and producing role as the co-founder of HTV, Hammond Organ’s TV network and has since accepted a role as contributor for Keyboard Magazine and Electronic Musician.

Funny, energetic, engaging, memorable … indescribably unique but as MTV put it, “Emiko is incredible live. She totally sucks you in!”

Keyboard Magazine has said “”Invoking Billy Preston as much as Billy Joel, synth-slinging Emiko proudly doesn’t fit into the “singer-songwriter” box … we expect to hear a lot more from her in the coming months.”

Anyone that meets Emiko meets her as a fan and ends up a friend. Her shows, her music, her message, and the experience are as real as she is.

When she is not touring, Emiko spends her time writing words that rhyme and music that sounds good in Los Angeles where she lives with her family and, apparently the neighbor’s cat , Snowflake, who has hijacked her doormat. 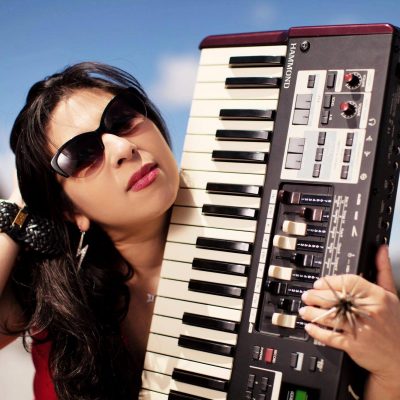