with:Terrance Simien and the Zydeco Experience

Danny Plays The B-3

For the past 32 years, keyboardist Danny Williams has performed in venues throughout the United States and abroad with the Grammy winning Louisiana Zydeco band Terrance Simien and the Zydeco Experience. Although small in stature, the 4’ tall Williams is the personification of the old adage, “Dynamite comes in small packages.” In addition to bringing his 38+ years of expertise in playing all types of keyboards to both the stage and recording studio, he brings a vast knowledge of music technology, a charismatic stage presence, expert singing and harmonizing abilities, prolific songwriting skills, and a passion for sharing music – especially Zydeco music.
Williams, born August 12, 1960, in Houston, Texas, moved with his single-mom, Viola, and five older siblings to her hometown of Scott, Louisiana, when he was only nine months old. Viola enrolled her children at Holy Rosary Catholic School and began cleaning houses to pay for tuition. A woman of great faith and moral character, Viola rode a bicycle to and from work each day except in extremely inclement weather. Her faith, indomitable spirit, and work ethic positively affected her children, especially Danny, who was born with dwarfism and then acquired polio. Doctors predicted that he would experience great difficulty walking, would never run or drive a vehicle, and would be wheelchair-bound by his teen years. Inspired by his mother’s tenacity, Danny set-out to prove the doctors wrong and live a normal life. Not only did he walk and run, but he also learned to drive a car and a motorcycle.
At the age of 11, Danny joined the Holy Rosary band. His older brother, Leroy, played trumpet in the school band and was Danny’s inspiration. Danny learned to play the trumpet and also learned music theory and composition. He played in the concert, jazz, and marching bands. Leroy also played in a local professional funk band called Sky, which motivated Danny to join his first band, Cosmic Sky, in 1979. Danny played trumpet while standing on a Coca-Cola crate so that he would be tall enough to be seen. He then taught himself to play the piano and purchased his first electronic keyboards, a Roland D-50 and a Memory Moog. His career as a keyboardist and musician took-off. He branched-out into writing and recording his own music and started recording and producing other artists in his home studio. As his musical skills grew, so did his reputation for being a gifted, well-rounded artist.
As the keyboardist for Terrence Simien and the Zydeco Experience, Danny shared the honor of winning the 2008 Grammy for “Best Zydeco or Cajun Music Album” with Simien and fellow band members. On January 26th 2014 Danny and his band mates won their second Grammy in another category, “Best Regional Roots Album of The Year.” January 2018 Danny also play B3 on the Book Trailer for novel Lullaby Road by James Anderson.
He co-produced and played on the last ten of Simien’s albums, which feature his original songs. Other career-notables include performing the song, “Dance Every Day,” which he co-wrote with Simien, in the movie “The Lucky One,” opening for artists such as The Dave Matthews Band, Dr. John, Chuck Berry, and Barbara Streisand, and performing on stage with Stevie Wonder for President Clinton’s Inaugural Ball. Danny’s biggest highs, however, come from playing Zydeco music for people around the world. He loves seeing people from all countries begin to smile and dance as soon as the band strikes-up the first song, and relishes hearing people relate how the music makes them feel and how it pulsates deep within their hearts and souls.
The band’s Creole for Kids show is also something about which Danny is passionate. The show is the band’s vehicle for carrying Zydeco music and Louisiana culture to children around the world. During the show, children have the opportunity to interact with the band onstage, learn about Louisiana music and culture, and discover how a band works together as a unit. Danny has witnessed many handicapped children become positively affected by the show. These children seem to relate to him because of his differences. One mother sent an email relating how her Down’s syndrome son must have, “sensed a kindness in them that he trusted,” because he readily went onstage when invited to play the washboard with the band. This is the type of reaction that motivates Danny to continue bringing the happy, soul-stirring, foot-stomping sounds of Zydeco music to people around the world, and to keep writing songs, recording, producing, and performing,
Written by: Monica L. Bonin Gary 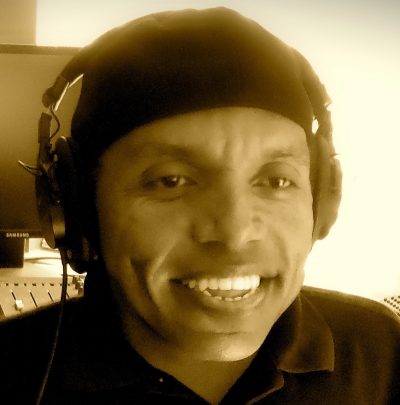