Rooted firmly in the organ tradition with the great Hammond B-3 jazz players like Jimmy Smith, Groove Holmes, Don Patterson, Jimmy McGriff, and Wild Bill Davis who emerged in the 1950s, Dan Fogel caught the B-3 bug early. Born June 21, 1948, in Atlantic City, NJ, Fogel came from a family deeply ingrained in the entertainment industry, being Jackie Gleason‘s second cousin and the nephew of Helen Forrest, a famed big-band singer who worked with Benny Goodman, Harry James, and Artie Shaw, among others. It was a natural step for Fogel to follow his path and first love music.

As a young child Fogel found an opportune job shining shoes in front of the legendary Club Harlem when he was only seven years old. By osmosis he couldn’t help but soak up the fabulous sounds — mostly jazz — that came from the club.

Luminaries of the jazz organ Groove Holmes, Jack McDuff, Larry Young, Jimmy Smith, Don Patterson, Butch Cornell and Doc Bagby were Fogel’s direct inspiration. As a young teenager, Fogel was able to shadow his idols and watch the depth and soul of this music “in the flesh.” At the live shows Fogel experienced the thumping bass, clomping chords, sounds that twirled from the Leslie into Fogel’s body had him hooked hard. It was after hearing Groove Holmes’ B-3 version of “Misty,” Fogel was forever hooked on the intoxicating sound of Hammond. Fogel started piano lessons at the age of ten, but it was the organ that called to him as his true love. With his parents’ help and a whole lot of shoeshine money, Fogel purchased his first B-3 organ when he was 11.

Countless hours of dedication organ at Wonder Gardens in Atlantic City where he was the house band with classmate drummer Harvey Mason (formally with Herbie Hancock – ‘Maiden Voyage’) now with ‘FOURPLAY’. Two years later Fogel emerged, made his debut and splashed into the scene like a tidal wave and was soon gigging regularly in the surrounding area on a myriad of gigs including the celebrated Kentucky Avenue, in Atlantic City, NJ, which was a hotbed for Jazz organists. Jazz Organ was not available as coursework in music colleges so it was on gigs and jam sessions where Fogel developed his “Grits and Gravy” style.

Fogel holds true to the tradition and vocabulary of Jazz organ keeping the authenticity of time and the soulful connective punctuation taught to him by his idols. Being there and learning from the originators of this art form has given him the platform from which he conveys his message. Fogel’s style of playing incorporates the licks that have been passed down from the Masters in addition to incorporating his own voice into the mix. Fogel is not a newcomer in the scene creating complete mimicry. He is from the scene of the Masters, playing alongside or along the same tour route as Larry Young, Groove Holmes, Don Patterson, Jimmy McGriff and in the past Jimmy Smith. Fogel continues his legacy of grinding solos and greasy down-home groovin’ with techniques he has developed with the Leslie tone cabinet that have created his own unique style while still honoring the genuineness of the instrument by purposely not using compression. digital options and recording live with no overdubs.

Fogel continues to use the Atlantic City area as a home base. Over the years Fogel has worked with such jazz notables as Pat Martino, Odean Pope, Billy James, Eddie McFadden, Sunny Murray, Cecil Payne, Tony Ventura, Rufus Harley, Monette Sudler and Harvey Mason. Fogel has released six albums on his own Laughing Waters imprint: Movement de la Mer (1983), Naked Flowers (1986), Something Like That (1996), Oracle (2001), Soul Eyes (2004), and 15 West (2006). 15 West was recorded in 2006, but was not released until 2007. Many of these same artists were in the recording studio with Fogel. In fact, for 15 West, Fogel has captured the Boss Trio heritage with a guitarist who was deeply involved in the Jazz Organ combo scene ‘back in the day’. O’Donel Levy welcomed Fogel’s invitation and truly enjoyed every minute back in the organ/guitar marriage. “He used to play with Ellington and he was Jack McDuff’s guitarist for many years, he was also called by his ole’ buddy George Benson to fill for him when he couldn’t make it”, says Fogel. “O’Donel has twenty or twenty-five records on Groove Merchant. I had no idea when we called him in. We were like bread and butter. He said he never thought he would be playing like this again.”

Finding the perfect guitar match for an organist can sometimes be a difficult task, as Fogel suggests: “It was very hard for me to find a guitarist that really swings. This guy O’Donel really has the vintage, the age, the experience, the finesse and the groove.” Fogel’s most recent choice for his drummer has also been fortuitous. Drummer, Webb Thomas whose resume includes backing for Pat Martino, Uri Caine, Odean Pope, Greg Osby, Kevin Eubanks, Jimmy Heath and George Benson. For the tenor seat Fogel picked Pete Chavez, who has appeared on recordings for Saheb Sarbib, John Patton, John Zorn and Mike Stern.

For Dan Fogel, Jazz Organ has been a way of life, not just a side hobby. He is thought to be one of the last real Jazz Organists around who has not strayed from the music he grew up with and learned to play so masterfully. His commitment to this heritage is heard in his latest release 15 West and clearly continues the history of this rare genre played out on Hammond B-3 organ. It’s this recapitulation of heritage and commitment to authenticity that keeps the Jazz organ tradition alive and not forgotten in modern times. The real twist on this CD is that it is performed by true masters of the era who are living and breathing monuments still alive and able to share this magical art form in today’s times. 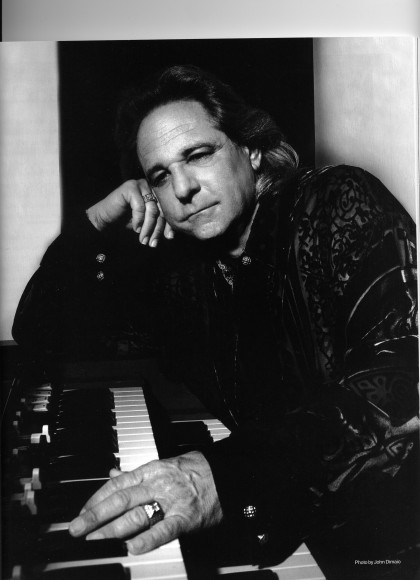