“The touch , the sound , the feel , of this instrument can often be imitated but never will again be authenticated ….you can’t reinvent the wheel !” B. Carson

What happens when you combine a keyboard and with a gifted musical mind? You acquire the incredible musicianship of one Brian J. Carson. He is one of the music industry’s greatest talents. Brian J. Carson was born on July 27, 1981 in Jefferson, Ohio. Music has always been an integral part of Brian’s life. Even at the early age of three, music had his undivided attention. By the time he was seven, he was playing organ at his church.

Brian’s early musical influences originated in the church; which can be a very difficult proving ground for even the most dynamic musician. But young Brian persevered and as he began to grow his influences began to broaden to various genres of music, which included jazz, fusion, R&B, and classical music. Within those genres, he began to become inspired by some of the greatest musicians the world has ever known. The likes of Jimmy Smith, Chic Corea, Oscar Peterson and Joey Zinwinul were at the top of his list inspiration.

Because of Brian’s effervescing personality and incredible gift of music, he has been afforded the opportunity to travel extensively around the world to perform for the world’s premier dignitaries; particularly, President Barak Obama (2008), the King of Swaziland, Africa (2013), and most recently the Governor of Caracas, Venezuela.

Brian’s performance and recording credits are quite lengthy and impressive. Kelly Price, Fantasia, Anthony Hamilton, Kim Burrell, Tye Tribbett, Israel Houghton and the late Whitney Houston are a few of who’s who among his list. He is also no stranger to production. He has recorded with Gospel Music Workshop of America, which brings the worlds biggest and brightest Gospel and Contemporary Christian stars together to record and perform. He has also recorded and arranged several albums for the Grammy and Stellar award winning Gospel Legend John P. Kee.

Brian, can also be seen each week around the world on the Emmy Award Winning television broadcast “Taking Authority”. He is also a private instructor that takes pride in instructing today’s youth, motivating them to cultivate the gifts that are inside of them.

Brian is making an impact on the music industry and his community with his dedication, loyalty and faithfulness to his craft. When asked about his musical career he says, “My desire is to leave an musical imprint that will not only be a memory but a legacy to the world. 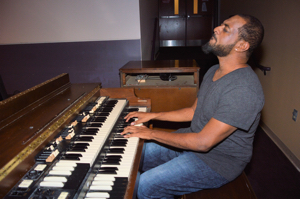