Bruce in the USA

“I was one of the lucky ones” says Atticus. “My mom was an organist, so I grew up with a Hammond organ, a Leslie, and PR40 cabinet in my house.” Atticus took that luck, mixed in some nerve, and created quite an interesting career. At age 12, his accordion trio opened a Lionel Hampton USO show. “Pops” saw talent in the youngster and featured him in several succeeding shows. At 16, his Memphis high school band director got him into the A.F.of M. union playing country club dates and the weekly WHBQ radio broadcasts of The Ray Franklin Orchestra. He played in several “mixed race” bands in the later 60’s backing up Memphis soul artists including Rufus Thomas and his daughter Carla.

After graduating high school he moved “as far away from Memphis as I could get”. In L.A. his organ trio was the house band at The ETC club across the street from A&M studios. Always looking for new horizons, Atticus moved to Nashville to work with the Opryland theme park band. He met guitarist/producer Dave Perkins who introduced him to the then new genre of music-Christian Rock. Atticus did session work for Russ Taft, Randy Stonehill, Steve Taylor, Ric Cua and more. He then toured with an all star band made up of Dave, Ric, Phil Keagy, and others backing up headliner Steve Camp. Atticus played NYC a few times and wanted to move there. Willie Nile had told him, “If you were in town, I’d use you.” So Atticus packed his B3, Rhodes, and synths into a ‘52 Dodge pickup, drove straight to The Record Plant where Jimmy Iovine was recording Willie’s first album, and announced “I’m here!” As surprised as Willie was, Atticus got to play on that album, the next, and the tour that followed. He next joined The Revelons-a seminal NYC punk band that was Playboy Records’ first signing.
In the mid ‘80’s Aretha Franklin sent her musical director, H.P. Barnum and her pianist to New York to get a “NYC rhythm section”. Atticus recalls the audition: “After I played down the charts, Nicky, the pianist, asked me “Do you know You Are My Sunshine?” I figured it was a trick question, but I answered, “I know the Ray Charles version cause it has an organ intro that goes like this….. And I got the gig!”

This was the beginning of a run that would make him a top NYC keyboardist for female recording artists in the late ‘80’-’90’s. Following Aretha, he worked for Nona Hendryx, the original Broadway “Dream Girls” Loretta Devine and Debbie Burrell, Taylor Dayne, Debbie Gibson, Cyndi Lauper, Nina Hagen, Stephanie Mills, and Lucinda Williams. He went on to hold down the B3 chair with The O’Jays for 10 years.

Now it was Las Vegas calling him. After 20 years in the same NYC apartment (with a Model A, because a B would not fit thru the door) he picked up roots once again. Since moving to Vegas, he has played in many music show productions. During a 5 year stint with one of those shows, Legends in Concert, he met Matt Ryan, the lead of Bruce in the USA- the number #1 Bruce Springsteen tribute show. This is where Atticus currently makes his home, and is thrilled to be playing the mighty Hammond Sk2 for their busy schedule. 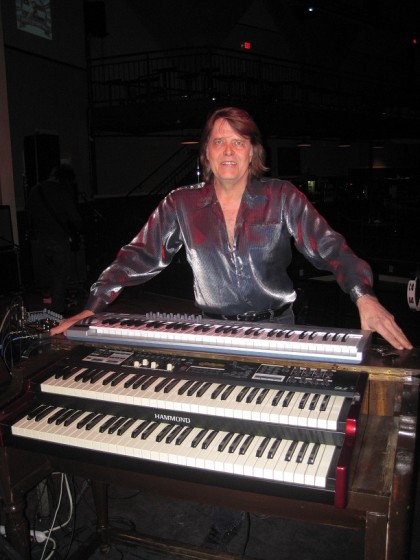