Adam Pryor has been studying keyboards since the age of 4. After forming his first band at 8 years old, he began performing around the Central Wisconsin area. Currently at the age of 19, he is sought after from bands all throughout the United States in varying styles. He has played many of the largest stages in the world including Milwaukee’s Summerfest multiple times and soon India’s Mahindra Blues Festival and Joe Bonamassa’s Keeping the Blues Alive at Sea cruise. Adam is well versed in Blues, Country, Rock and Jazz. He currently performs with a wide variety of bands, including Brandon Santini, Cadillac Pete & The Heat, Spicy Tie Band, Darren Jay & The Delta Souls, Jake Kershaw, and Joe Bucher. He has shared the stage with some incredible performers in his young career including Buddy Guy, Milky Chance, Walter Trout, Dennis Provisor of the Grass Roots, Jellybean Johnson of Morris Day & The Time, Eric Marienthal & Sal Lozano of Gordon Goodwin’s Big Phat Band and dozens more.
Adam landed on a Hammond Organ at the age of 13, where he started off with a vintage M3 and moved on from there with his current A100 and Leslie 145. He now tours with a SK2. He understands and unleashes the full tone and soul of the Hammond with every note. He appreciates the true beauty and sound of the new Hammond keyboards as he expresses himself through them just like the vintage consoles like no other instrument can. 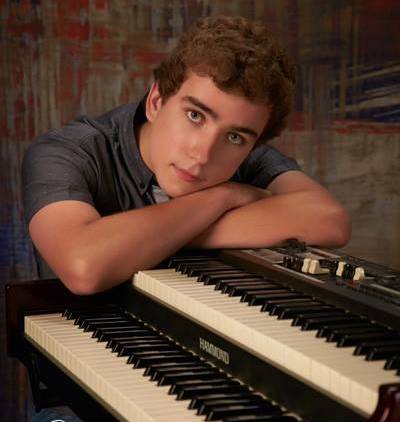