Leslie Pedal
Dave hails from the East Coast, born and raised in the Boston, Massachusetts area.At age 11 he put his first band together.  Later one of his first gigging bands was called “Dave and the Essex”.  He was in several bands as a teenager.  Early bands included “The Aftermath”, “Ice” (because they were so cool) “Sledgehamma” and “August”.

Photos from those early days are rare, but Jim Streeter and his wife Karen (aka Karen Diana)submitted the photo above.  Karen Diana was a childhood friend of Dave’s, and while going through some of their old photos they found this one (below) of Dave’s band playing at her graduation party in her back yard.  This is the infamous “Dave and the Essex”.  Why the “Essex” you may wonder?  That was the model name of a VOX brand amplifier.  The Beatles used VOX gear, so that had to be cool, right?  In the photo, Dave is pictured to the far left (in the hat).  Drummer is Tommy Broder, next guitarist on the SG is Michael Mariani, and Mark Mariani is on the far right.

Dave Amato and Robert DeMoss have givensome details on this old photo of “The Aftermath”.This photo at left was taken by Robert DeMossand is from 1965.  Dave is the lower left holdingthe solid body guitar.  The guitar is a Teisco DelRey, four pickup guitar.  He remembers it as aterrible guitar with a very high action.  Teisco Del Ray were cheap guitar Japanese made guitars, which havebecome somewhat collectible.  Dave said he wanted a Fender Stratocaster really bad, but couldn’t afford one.Dave added that he had started playing guitar in 1961.  his father made him practice and follow his lessons, butDave just wanted to play what he felt like playing.  His interest in the guitar was cooling off when the Beatles hitthe charts in 1964.  That was when he decided to take the guitar more seriously, and has stayed with it ever since.Dave remembers Steve Bremner, (in the back with the Fender Mustang guitar), and Billy DeMoss (on the right playing the acoustic guitar.  Many thanks to Dave Amato’s childhood buddy Rovert DeMoss for submitting this photo and providing details.In 1980 Dave started a new decade by making the big move from the East Coast to the West Coast, pursuinghis musical career in L.A.. Dave played a short stint with Black Oak Arkansas, did sessions for LaToya Jackson, and sang backing vocals for the likes of David Lee Roth, Rick Springfield, and  more famously with Motley Crue on the hit song “Girls Girls Girls”.  That is Dave singing the refrain of “Girls Girls Girls”. He also backed Kim Carnes.

In 1985 Dave took a big roll with Ted Nugent. Dave told me his most memorable tour was in 1986 when he sang lead vocals and played guitar with Ted, and they shared the tour bill with Aerosmith. He stayed with Ted for three years, making “Little Miss Dangerous” in 1986, and “If You Can’t Lick ‘em, Lick ‘em”.  Due to a conflict of schedules, Dave left Ted Nugent in Dec of 1988 when Ted accepted an unplanned tour and Dave had other obligations.  Ted and Dave remain good friends and have even shared the stage with Ted opening for REO Speedwagon in 2001 and again sharing the stage on tour in 2012.Dave and Ted, photo at right submitted by photographer David Plastik in 2008.  His website is:  www.80sRockPhotos.com

Photos of Dave performing with Ted seem to be rare.I found this one (at left) while surfing the web. Thank you to Justin for granting permission for it’s use here on the Dave Page. During the break with Ted, Dave had been traveling to Australia to do work with Jimmy Barnes. You can hear Dave on Jimmy Barnes double live album “Barnstorming”. Christian Rock group “Mastedon” fan Bill Chapman advises Dave played lead guitar and sang some lead vocals with John and Dino Elefante (formerly of Kansas) making up the supergroup called “Mastedon”. They cut two CDs; Mastedon (1988) and Lofcaudio (1990). Bill sent copies of the CD covers to me.(thanks Bill!) I asked Dave about these and he said they are really pretty good.

During 1991, Dave had time to help out Bon-Jovi’s Richie Sambora on his solo project. He is on Richie Sambora’s “Undiscovered Soul” CD and we suspect he is on an imported version titled “Undiscovered Soul Tour Edition”. Credits are written in Japanese so it is hard to say, but Richie is heard saying “Take me away Dave”.Dave was on Micheal Bolton’s “How can We Be Lovers, If We Can’t Be Friends” video. That was in about 1992. Dave told me people kept asking if he was Michael Bolton’s brother. Sometimes he just went along with it, I don’t see any resemblance.  This video has been spotted on the internet.Gary Richrath left REO Speedwagon in 1989, Dave quickly joined the band in May of 1989. There seems to be some confusion about this date, Dave is certain of it.  Time flies when we’re having fun, and Dave certainly looks like he’s having fun when he’s on stage. Dave has been involved in all newer Speedwagon recordings. These are “The Earth, a Small Man, His Dog, and a Chicken” and “Building the Bridge”, “Ballads” and “Arch Allies”. “Building The Bridge” has a Beatle-ish tune titled “When I Get Home”. It is my pick of the set.  More recently the CD “Find Your Own Way Home” was released in 2007.Dave said the “REO songs are great because there is a guitar solo in every song.  Can’t ask for much more than that.” The “Ballads” contains the REO classic ballads and a new tune. Dave is enthused about the new song titled “Just For You” which is a Kevin Cronin/Jim Peterick (Survivor fame) song.  Dave doesn’t see any end in sight for REO Speedwagon’s touring and new music productions.

Above he is telling us where he would set the knobson his Fender Twin amp. In the clip at right, Dave was shot at the NAMM convention’s Fender booth. I want to know if Dave is thinking about switching over to being a lefty, or if Fender printed the photo backward?

“GUITAR PEOPLE” by Willie G. Moseley. This book consists of pastinterviews printed in Vintage Guitar Magazine. Dave has a two page interview and a few photos. The interview seems to be from 1995, a date isn’t provided. There are great interviews of various artists and others who have made an impact on the guitar industry. A highly recommended book, there are 245 pages of interviews.

Dave co-stars in this Cher concert video titled “Cher Extravaganza, Live At The Mirage”. This should be titled “Cher, featuring Dave Amato”. Dave is definately the star of the band. He is on camera many times and his guitar playing is prominent on every song.  All Amato fans will enjoy this concert. Dave expressed to me what a great time he had on this tour with Cher. The drummer (Ron Wikso) and bassist (Hugh McDonald) are friends of Dave’s and they were really rockin’ together. Dave and Cher seem to have a great chemistry on stage too. Originally released on VHS, it is was subsequently released on DVD.

At left a genuine REO Speedwagon collector card with Dave.Two side-projects for Dave during 1999 were the compilation CD “New Friends In Low Places” which features Dave on one song.  He sings leadand plays guitar on “Shameless”.In 2009 Dave played on John Elefante’s “Revolution Of Mind” DVD.In addition to singing and guitar playing talents, versatility must be one of Dave’s most valuable assets. He’s been associated with a wide spectrum of personalities and styles. Be it Left Wing, Right Wing, or West Wing,Dave’s congeniality carries him thru with a smile. Dave and REO Speedwagon tour every year.  Often with their good friends: the band STYX. 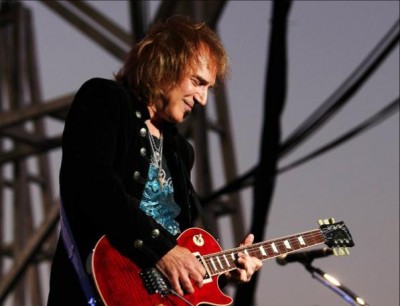